In the wake of 2016’s U.S. presidential election, some people are claiming that the Electoral College is obsolete and unfair. There are a couple of petitions circulating, along with miscellaneous talk on social media, about doing away with the Electoral College. Some people now believe that only the popular vote should matter.

Most don’t know what the Electoral College even is, or why it might be important. Many complaints are reactionary in nature. Not understanding how elections work has left a large number of people confused, scared, and/or angry. I don’t blame them, simply because of the education system here in the United States. A lot of facts aren’t being taught. For example: Only 36 percent of Americans can name the three branches of government. The United States also isn’t a pure democracy. It’s categorized as a democratic republic, federal republic, or constitutional republic with a representative democracy.

Here’s a 5-minute explainer on the Electoral College. In short, Americans vote for a vote; the system has good and bad aspects, but viable alternatives haven’t been seriously discussed on a national level. A short video from Praeger University says the Electoral College accomplishes three major things: it protects against mob rule, encourages coalition-building, and helps protect against voter fraud.

The most obvious folly to only electing the President by popular vote is this: candidates would just campaign where the most people are. A large portion of the United States would be ignored, forgotten, and without a voice. The most sparsely-populated areas wouldn’t matter at all to politicians. (Maybe local ones.)

A 2013 article from Business Insider detailed how “half of the United States population is clustered in just the 146 biggest counties out of over 3000.” Take a look at their map: 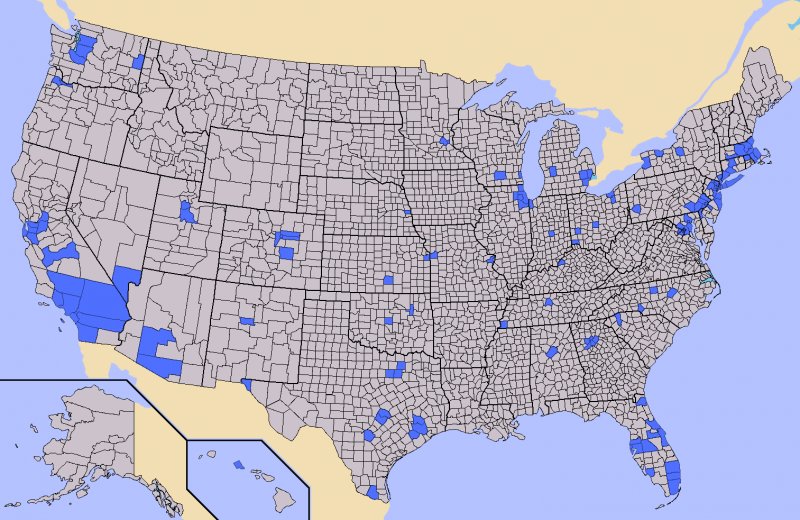 Those shaded-in-purple counties are where half of the United States lives. The urban-rural divide will likely increase over time, too. The Electoral College ensures that every state has a say in who gets to be President. It wouldn’t be fair if only 3 states controlled who governs all 50 states. If you’re campaigning for election, you should bring together people from all walks of life – not just metropolitan areas. Removing the electoral college would give major cities more power while taking away power from people who don’t live in cities.

One of the biggest problems with the American voting system is Americans themselves. In the past 100 years (1916-2016) the voter turnout never went above 64 percent.

Another graphic from Business Insider:

A closer look at recent voter turnout, according to Statista:

Until the United States can think of a better way to elect its presidents – other than the Electoral College – it should probably stay. Simply going by popular vote doesn’t solve any of the current problems with the system, and such a change could be worse.

This is a nation made up of states, not the undifferentiated population as a whole. Those states have different political, economic, and cultural interests… and the Founders designed a federal system that respects each state’s identity and autonomy. – Jeff Jacoby, The Boston Globe

NUMBERS UPDATE: 24 November 2016: Hillary Clinton is currently winning the popular vote by 1,265,379 votes, and many people are using this to support anti-Electoral-College sentiment. However, this is not the final tally. Plus, most of her lead comes from two states. She’s up by 1,503,304 votes in New York and 3,389,656 in California. Her entire lead can be distilled down to Los Angeles. Clinton is ahead in Los Angeles County by 1,273,485 votes – if it wasn’t for this, she would be losing the popular vote. For the people who want to abolish the Electoral College: assuming the numbers hold steady, do you want the deciding factor in every presidential election to be Los Angeles? Does one city represent the entire United States of America?